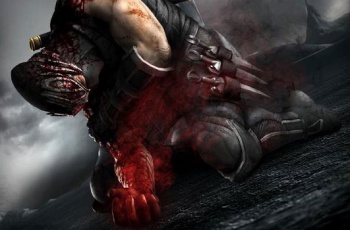 We've got a new trailer and "key visual" for Ninja Gaiden 3 and it's exactly as bloody as you'd expect.

As with this morning's Dead or Alive 5 announcement, Tecmo Koei has linked an ambiguous promotional image to the latest Ninja Gaiden 3 trailer. You can see the key bit of that image at right, though again, I'd recommend a trip to the Tecmo Koei Facebook page to see Ryu's tilt-angled histronics in their full glory.

Unfortunately for my ability to wildly speculate, Ryu doesn't seem to be crying, despite that severe rash on his arm. I'm no doctor, but I would recommend having that checked out by a specialist, or possibly a wizard.

This dermatological nightmare also features heavily in the game's new trailer. Dubbed "Consequences," the vignette seems to focus on the karmic backlash of living life as an ambulatory death machine. It appears, that if one spends 20 years slashing people, demons and those intensely annoying birds into pieces, eventually all that bloodshed will come back to haunt you with sanguine photo filters and hallucinations of men in jaunty berets.

Also, you may or may yes murder the British.

The really interesting part here though -- and this may just be my twentysomething game geek side talking -- comes at the 0:58 mark. See that lady? The mysterious woman who, unlike the majority of other key women in Ryu Haybusa's life lacks the, uh ... "huge tracts of land" you'd expect from a Team Ninja-developed game?

I was going to guess that she might be Irene Lew, but Team Ninja already morphed her into yet another outlet for the twisted, juvenile image of feminine beauty that defines its key demographic.

This is going to nag at me. I like the idea of a less comically over-sexualized female character in Ninja Gaiden 3, but seeing Team Ninja step out of its modus operandi like this is just so jarring. It would be like Kanye releasing an album of clarinet standards or Brett Ratner creating a film that didn't feature a wacky minority sidekick.

This is a weird new world, boys and girls. I'm not sure I like it.

Escape to the Movies: The Wolverine MovieBob 79 Comments