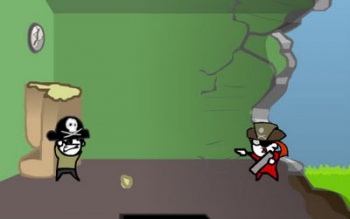 Tiny Build Games preempted the piracy problem by releasing No Time To Explain for torrent themselves - with a salty twist.

If you can't beat 'em, join 'em. Anticipating that their side-scrolling time travel game No Time To Explain would be pirated, Tiny Build Games released the game to a torrent site themselves. However, pirates who downloaded the game illegally found that the characters mirrored their own sensibilities: every character in the game came decked out in pirate regalia. In spite of the developer thumbing its nose at pirates, Tiny Build claims that many of these scalawags have actually gone on to buy the game.

"We thought it'd be funny to leak a pirate version ourselves which is literally all about pirates and pirate hats," said Alex Nichiporchik, one the game's designers, responding to an inquiry from the Torrent Freak website. "I mean, some people are going to torrent it either way, we might as well make something funny out of it."

Surprisingly, this unorthodox technique has actually bolstered legitimate sales. Tiny Build Games has not released any sales figures, but Nichiporchik suggested that it saw a noticeable increase in sales from people who appreciated the joke in the pirated version. "People bought it simply because they liked the joke," Nichiporchik continued. "[We] don't see it hurting sales in any way."

As anti-piracy measures go, this is a lot less intrusive than DRM restrictions, but how well will this strategy ultimately work for Tiny Build? Furthermore, once the novelty has expired, will any other developer be able to pull a similar trick?

View from the Road: When I Was a Pirate John Funk 175 Comments
Comments on