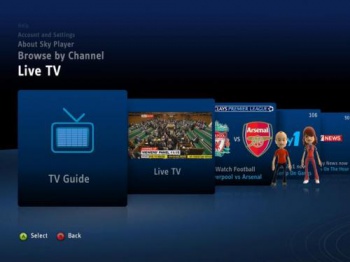 Microsoft's CEO says that American customers can expect both live TV and on-demand video from their Xboxes this holiday season.

In a demonstration to Microsoft's financial analysts, company CEO Steve Ballmer revealed that US Xbox Live customers should be able to watch live television and access on-demand video via their consoles by Christmas. Customers in the UK, France and Australia already enjoy a similar service that allows them to watch satellite TV via their consoles without any messy cables.

Speaking in Anaheim, Ballmer led a short demonstration of the new platform before adding that the service's biggest strength, in his opinion, lies in the Xbox's user interface. "Certainly we all know the frustrations of using guides and menus and controllers," he said. "We think a better way to do all of this is simply to bring Bing and voice to Xbox. You say it, Xbox finds it."

He also added that Xbox Live's large user base could add a social element to proceedings, saying that the project's "vision" is "[having] any entertainment you want with all the people you care about, really simply and on any screen."

Financial analysts are split over the announcement, with some confidently saying that the platform's voice and motion controls will give it the edge over similar services. Others worry that without a recommendations service or anything else to make Xbox TV seem more attractive than regular TV, the service will simply sink into the same hole as other companies' attempts to launch similar services.

One thing that most seem to agree on, however, is that Xbox Live's 35 million strong user count creates an especially strong install base for the project. Being able to watch live TV without having to involve myself with cables and dishes definitely sounds good, as does the prospect of being able to shout at my TV to get it to find things (because really, remote controls are so 2010), but we'll have to wait and see if Microsoft are planning to add any more features to the platform to make it worthwhile.