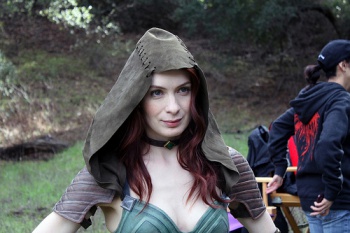 When Hawke needs a jewel thief, an internet icon steps up to the challenge.

If you liked Dragon Age 2 but felt that it just wasn't giving you your Felicia Day fix, BioWare's new DLC pack can help. In conjunction with the upcoming Dragon Age: Redemption web series, BioWare will release a downloadable adventure called Mark of the Assassin, in which protagonist Hawke teams up with Tallis, an Elven thief who is voiced by and modeled after the redheaded Internet sensation.

The adventure won't sell itself on star power alone. Mark of the Assassin will spin a yarn about The Heart of the Many, a priceless Orlesian jewel that Tallis wants for herself. Hawke and Tallis will team up to tackle the many traps, puzzles, and monsters standing between them and riches. Furthermore, Chris Priestly, a Community Coordinator at BioWare, promises that Mark of the Assassin will "[give] players the opportunity to experience a new tactical way to play the game with the return of Stealth gameplay."

As for the actress behind Tallis, fans may be familiar with Felicia Day from her appearances in Buffy the Vampire Slayer, Dr. Horrible's Sing-Along Blog, and her popular MMO-lampooning web series The Guild. She has gained visibility as something of a nerd icon due to her genuine affection for the sci-fi and fantasy media in which she appears.

Players will be able to access the DLC at any time during the main story, provided they have reached their houses and Kirkwall. Budding jewel thieves can pick up Mark of the Assassin on October 11, 2011.