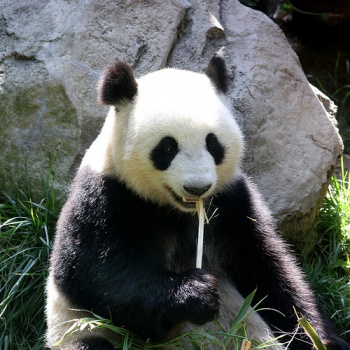 Yeah right, and biofuel-making microbes might fly out of a panda's butt!

In case you hadn't noticed, we as a people use too much fossil fuels to power our cars and electronic communication devices. The dependence on petroleum and coal not only causes geo-political conflict, but burning them releases all kinds of bad things into the air. Global warming aside, that much smoke in our lungs is generally a bad thing. The answer many have turned to in the last decade or so has been so-called biofuels made from crops we can grow easily like corn, soybeans and sugar. But that process creates a lot of waste too, and we haven't figured out how to derive enough energy from these sources to make it profitable. What's the answer? Well, apparently, the answer is panda crap.

Or more precisely, the bacteria found in the excrement of giant pandas. A study presented at a meeting of the American Chemical Society by Ashli Brown, a biochemist from Mississippi State University, claims that the microbe found in panda kaka could advance the process of making biofuels from all kinds of tough plant materials previously thought unsuitable like switch grass, corn stalks and wood chips.

"Who would have guessed that 'panda poop' might help solve one of the major hurdles to producing biofuels, which is optimizing the breakdown of the raw plant materials used to make the fuels?" said Brown.

For years, scientists assumed that high-powered bacteria must exist in panda manure because their primary food source is bamboo - the entire plant including stems, leaves and shoots. For the panda's stomach to break down all the stiff cellulose cells that support a bamboo stalk, the little buggers must have some serious mojo. But until the renewed interest in biofuels, figuring out exactly what bacteria was at work in panda shit wasn't that important.

For Brown, the discovery should shed light on our need to protect all species because we never know where the next breakthrough will come. "Animals and plants are a major source of medicines and other products that people depend on. When we lose them to extinction, we may lose potential sources of these products," she said, even though she had to look at the panda turds every day for the last year.

For me, this story has allowed the use of as many synonyms for feces that I could possibly come up with. Here are some more, just in case: poopy-stinky, bum brownie, cagadita, crapola, dookie, floater, majon, Mississippi mud, sewer serpents, scheisse, Cleveland Steamer, Dirty Sanchez, tootsie roll, milky way, turtle head and brown trout.