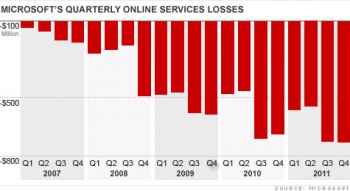 Not only is Bing nowhere near as big as Google, but it's losing Microsoft a lot of money.

Microsoft's Bing search engine was supposed to be a major game changer when it first arrived in 2009. Users could customize the page's appearance, the marketing campaign was clever, and it snagged some serious traffic at the time of its launch. The traffic has stayed high, but so has the expense: It turns out that Bing's cost Microsoft $5.5 billion in its two years of existence.

However, Microsoft has something to show for this expense. It currently controls a 14.7% share of the search engine market (though half of this traffic reportedly comes from the Microsoft-Yahoo! search deal). This presence on the Web has largely been taken from other smaller groups, since Google's share of the market is only down to 64.8% from a flat 65%.

Microsoft isn't going to abandon Bing any time soon, but it'll probably be quite some time before the service starts making its parent company some real money. Microsoft is banking on Web surfers changing how they search, using "natural language" and complete questions instead of keywords (which is what is used today).

Still, $5.5 billion is a lot of change to blow on a product that's still not turning a profit. It'll be interesting to see how long Microsoft continues to invest in Bing if it keeps losing money in disturbingly high amounts like seen in the graphic here.