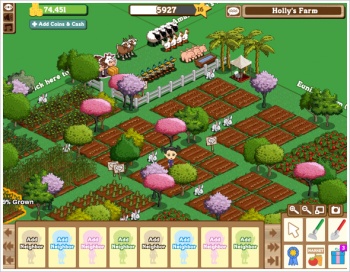 Increased overheads and reduced sales have taken their toll on the Zynga's pocket book.

Social gaming giant Zynga saw its year-on-year profits fall from $27.2 million to just 1.3 million, a drop of around 95%. The studio has also seen a decline in the number of people playing Zynga games on a daily basis, as well as a reduction in virtual goods sales.

Zynga has blamed this massive fall in profits on the fact that it did not release any new games in the first half of 2011 until Empires and Allies at the end of May, and on its higher than normal spending on staff and international expansion than it had in the past. It also said that the transitions to the now-mandatory Facebook credits had hurt profits, as Facebook took a 30% cut of all transactions.

The drop in daily users is thought to be the result of a more competitive social gaming market compared to last year, which seems a likely cause of the drop in sales as well. The company's overall revenue continues to grow however, albeit a lot more slowly than previous quarters. The revenue for Zynga's April to June quarter were up 15%, rather than the 24% increase from the January to March quarter.

Obviously, this isn't the best news in the world for Zynga, but it's not necessarily a sign that the company - which many "hardcore" gamers find rather distasteful - is on its last legs. A third party analysis of the company, included as part of its most recent SEC filing, has actually seen its valuation increase from $13.98 billion to $14.05 billion.