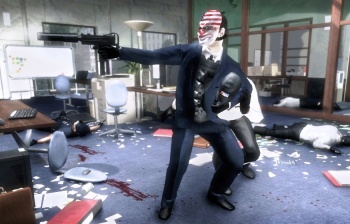 Bad news for would-be robbers: PAYDAY: The Heist has been bumped back to a nebulous "later this month."

A quick primer on the inexplicably capital-heavy PAYDAY: The Heist: The game is a squad-based multiplayer shooter that tasks groups of players with pulling off high-profile robberies while wearing increasingly silly masks. Robbing banks, swiping diamonds; imagine all the parts of Point Break that didn't involve Gary Busey, Anthony Kiedis or Lori Petty, and you have a relatively solid idea of what the game is going for.

Needless to say, that's a pretty awesome premise for a videogame, especially one available for $20 as a PlayStation Network downloadable title.

This delay is a move to ensure players and fans of our promise and vision to produce high-caliber games that deliver the best quality game experience.

Standard boiler-plate response. We should have expected that.

That doesn't worry me. Sony tends to offer those sorts of responses every chance it gets. It's like a meme for the company at this point.

What does worry me is the complete lack of a new release date. The closest we get to any sort of confirmed release window is a line that claims the game "will be available for digital download for the PSN and PC systems later this month."

If we're that close to the release date, why can't SOE quite nail down which day will see the game's debut?

I have no real information on what's going on here, so I invite you all to speculate wildly. For my part, I've got fingers crossed that SOE needs just a bit more time to properly model the game's Ronald Reagan mask.