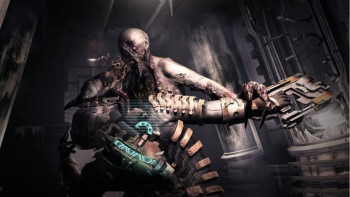 More Dead Space 3 rumors have bubbled to the surface, including one rather big pseudo-spoiler about the state of Isaac Clarke's mental well-being.

One of the underpinnings of EA's Dead Space franchise is that Isaac Clarke, the game's hero, is a little nuts. He butchers Necromorphs with ease and flair, but he also suffers from dementia and occasionally sees dead people. Converses with them now and then, too. But in Dead Space 3, so the rumor goes, his situation will escalate even further.

What follows could be considered a spoiler, at least until EA starts promoting the hell out of it as a Big Interesting Feature, so consider yourself warned, and having been warned, stop reading here if you don't want to be spoiled. Still reading? Fine. Dead Space 3 begins with Isaac facing a choice: go to Tau Volantis [presumably not the galaxy's most pleasant place] and rescue a woman, or be busted by EarthGov for all his Martian shenanigans. EarthGov must really suck, because he elects to undertake the rescue mission, with one-eyed sexpot flygirl Ellie in tow.

But she's not the only passenger, and this is the spoiler-ish part. Also along for the ride is "Shadow Isaac," the snarky manifestation of his now-full-on split personality. Shadow Isaac apparently gets up in Real Isaac's grill at every opportunity, such as when he calls him an idiot after falling into a tunnel. Shadow Isaac will be visible as an on-screen character and the two Isaacs will banter throughout the game - if the delusional rantings of a severely psychologically traumatized schizophrenic can be described as "banter."

Siliconera doesn't cite its source and even if it had it would just be some variation on "a trusted insider," so take it for what it's worth: an entirely unsubstantiated rumor that just appeared out of nowhere. That said, the combination of Clarke's ongoing mental breakdown and an excuse to send him into some blood-soaked hellhole that's been overrun by horribly misshapen, vomit-spewing zombies sounds like a pretty plausible setup for a new Dead Space game. But at this point EA hasn't even confirmed that Dead Space 3 will actually be made, so for now all we can do is wait and watch.