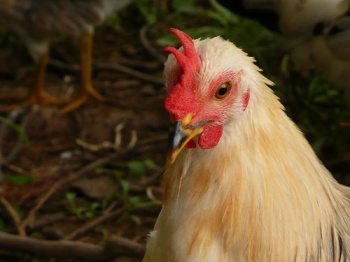 Be careful whose eggs you steal; chickens can also be stool pigeons in Skyrim.

If you read the story about Bethesda not fixing amusing bugs and wondered what sort of bugs it was talking about, then try this one for size: a recent bug in Skyrim caused the game's chickens to report crimes to the town guards.

Bethesda's Todd Howard said that the design team started getting caught for crimes more often than they should have, and that it wasn't immediately obvious what was going on. "'Why are we getting caught?' 'Oh, the chickens are reporting the crimes!' he joked. "That actually took us a while to track down, that bug. Like, 'Why is this happening?'"

Sadly, despite being incredibly entertaining, the bug, which Howard attributed to the game's Radiant Story system, was fixed. However, several amused fans have vowed to mod it back in, so if you want chickens to rat you out, it might be worth picking up the PC version of the game. Perhaps Bethesda itself could add it in as part of a DLC quest: a crazed wizard who has enchanted all the animals in a local village perhaps, or a strange daedric curse that has turned a family into poultry.