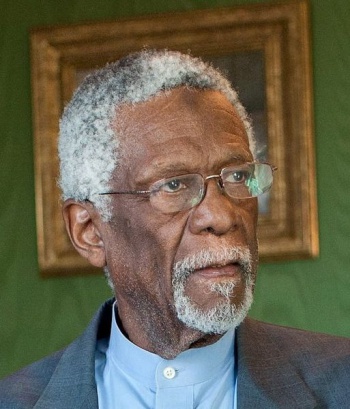 Bill Russell joins the list of professional athletes who feel the NCAA is profiting off him.

The commercialization of collegiate sports in America is a hot topic these days. Universities and conferences make so much money from broadcast rights and licensing and many institutions would be bankrupt if their students suddenly stopped playing football or basketball. Some former college players find it unjust that the National Collegiate Athletic Association (NCAA) earns money from their likenesses while rules are in place stating that the individuals cannot profit from participating in collegiate sports. For players that go on to successful professional careers, the lost income is kind of moot but for players who, for whatever reason, cannot, the current legal situation is doubly frustrating.

But now a heavyweight is entering the fracas. Bill Russell is arguably the greatest basketball player ever with 11 National Championships with the Boston Celtics and a two-time NCAA Champion with the University of San Francisco. The 77-year-old is suing the NCAA for licensing his likeness for use in videos costing $150 commemorating the championships of 1955 and 1956, for which he has never received a dime.

The suit filed in Oakland, California also places Electronic Arts as a defendant for using an image of Russell in the "Tournament of Legends" feature in NCAA College Basketball in 2010. Russell's suit seeks the blocking of all future sales of the games and the videos, as well as the profits and an undisclosed sum for damgage.

Players like former Rutgers QB Ryan Hart recently lost a lawsuit and a judge said that EA Games is within their rights to profit from selling a game such as NCAA Football that uses players' images or likenesses.

It doesn't sound like the NCAA is backing down. "Mr. Russell, like the thousands of other student-athletes who played the game, can capitalize on his likeness, reputation, athletic and academic successes as a student-athlete after college," the said the lawyer representing the NCAA.

Agreeing to the demands of Russell's suit "would cause the NCAA to lock up its archive of championship contests, and they would be held hostage unless every student-athlete, coach, band member, cheerleader and fan in a photo or camera shot received compensation," he continued. "That is not how the law works nor should it be."

This is a touchy issue, and the results of the suit will have repercussions for years to come. I can see both sides, honestly. It sucks to see an image of yourself used without your permission and other parties making money off of your accomplishments feels wrong. On the other hand, that's what you agree to when you become a student athlete under the government of the NCAA. The problem with that logic is the lack of any alternatives for college athletes because the NCAA effectively has a monopoly in place.

The system is broken, and these lawsuits are the start of trying to fix it. That much I can get behind.