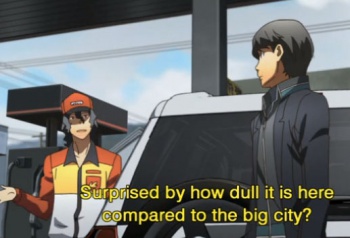 Let's say that you're a huge fan of the Persona series. You've murdered a ton of those skittering gold hands, romanced a few Japanese teenagers and saved the world from existential evil more often than Nietzsche and The Mighty Morphin Power Rangers combined.

You're anxiously awaiting the release of the PSVita Persona 4 remake and the Persona fighting game, but neither of those titles are coming fast enough. You've got the shakes, you can barely concentrate, and you rue the day you picked up this terrible addiction. What's a gamer to do?

Hulu has the answer.

As of now the online video streaming site is hosting the first, officially translated episode of Persona 4: You're Myself, I'm Yourself; the official anime adaptation of the game.

Admittedly, most adaptations of videogames, whether they be live action or animated, aren't all that great. For every lingering shot of Chun-Li taking a shower, you have a dozen John Leguizamos cast as lesser Italian plumbers. Fortunately, Persona 4: You're Myself, I'm Yourself seems to follow its virtual inspiration pretty closely. The music, the characters, even the game's hipper-than-thou aesthetics are all spot-on.

This being the first episode, it doesn't exactly tell the entire story of the game though. I had my fingers crossed for at least 20 minutes of Nanako being superZOMGkawaii to no avail. Still, presumably Hulu will be bringing more episodes of the show to the US sometime soon, so after the half-hour of reveling in your favorite faux-Japanese universe, you've got a whole 'nother round of those crippling withdrawls to look forward to.

Seriously Atlus, just give us a new game already! I've got ants crawling under my skin! I need a fix man!