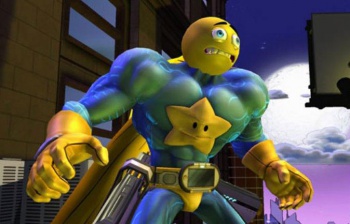 Over the past few years Twisted Pixel has been done some great work on the Xbox Live Arcade. Microsoft noticed, and now the developer belongs to it.

Backstory: Twisted Pixel is a well-regarded developer of such modern hits as Splosion Man and Comic Jumper. Microsoft is a multinational technology corporation most familiar to you folk for their Xbox 360 game console and Windows operating system.

As of this morning, the former is a part of the latter.

"Twisted Pixel is pleased to announce today that our studio has officially become a part of Microsoft Studios," reads a post on the official Twisted Pixel website. "This acquisition marks a momentous occasion for Twisted Pixel as it will better equip the team to create new IP and gameplay experiences for our fans while under the ever expanding universe of Xbox entertainment."

Likewise, Microsoft Studios corporate VP had nothing but diplomatic praise for the developer. "Twisted Pixel has an incredible track record of innovative, critically acclaimed, and most importantly, fun, games," Spencer said. "Microsoft Studios is home to cutting-edge entertainment experiences, and the incredible creativity of the Twisted Pixel team will help drive further innovation around Kinect and Xbox LIVE."

As to what this means for you, the consumer, the truth is that it likely means very little. Granted, it guarantees that Twisted Pixel's future titles will not appear on the PlayStation 3, but the developer was always best known for its Xbox Live offerings anyway.

On a positive note, having Microsoft-level corporate backing should allow Twisted Pixel to do things it was unable to do as an unaffiliated entity. Or, at the very least, it should allow the developer to put together a Comic Jumper sequel before I'm too jaded to laugh at Todd McFarlane's 90s-era art style.