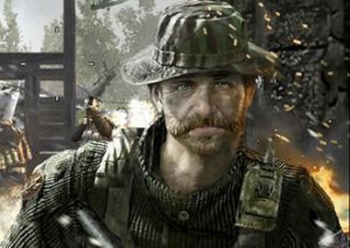 Activision is growing it out for Movember with the launch of Modern Warfare 3 in Australia.

Women have breasts and breasts are awesome, so when it comes to raising awareness and funds for breast cancer research, there are all sorts of great options available. But men's bits aren't quite so appealing, which may be why we've gone in completely the opposite direction with Movember, the one month of the year when men around the world grow out their 'staches in all their hideous glory and nobody gets to complain.

It's kind of appropriate, then, that Activision has hopped on the bandwagon with a promise to add $1000 to the donation made by whichever Australian gaming site raises the most money for Movember. It's also tying the charity in with the launch of Modern Warfare 3 with in-store signage and box stickers encouraging people to grow the hair and spread the word.

"The work the team at Movember do to raise vital awareness for men's health is incredibly important, especially to a large audience of male gamers, so this is a great way for us here at Activision Australia to assist and give back to the local community in a meaningful way," Activision's Jeff Wong told MCV.

The rules of Movember are simple. You start clean-shaven on the morning of November 1; you grow no facial hair but that which rests upon your upper lip; and no matter how god-awful it looks, you keep on growing it and you wear it with pride, because you, sir, are a man. Modern Warfare 3 comes out in Australia on November 17; the rest of the world gets it on November 8.

UPDATE: There's been some confusion about the amount of money Activision is kicking in to the Movember campaign. Every little bit helps, obviously, but $1000 from a company the size of Acti seems a little... well, chintzy. But the publisher actually has a lot more going on than just that.

Activision is a "major sponsor" of Movember, according to spokeswoman Natasha Brack, who explained that the company is using the launch of Modern Warfare 3 to generate interest and drive sign-ups. "We aim to build awareness of this important charity via our MW3 activities such as in-store [an exclusive partnership with Harvey Norman], on-pack [stickering] and via media partners," she said. "The $1,000 was purely an incentive for the gaming community to get behind the initiative to raise funds for Movember and for the outlet who raised the most money, we'd donate an extra $1,000 to their fundraising."