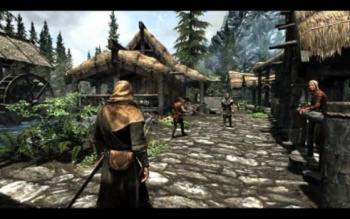 The system requirements for the PC version of Skyrim turn out to be surprisingly gentle.

Buying videogames for a PC is an inherently trickier process than buying them for consoles. It's the price we pay for being elite, I suppose, like the great responsibility that comes with great power or something like that. However you want to look at it, here's some good news for the upper crust: you won't need an ultra-killer rig to go strolling through the fields of Skyrim.

The minimum PC requirements, as tweeted by Bethesda's Pete Hines:

And the recommended spec:

For being part of a franchise famous for beating the crap out of otherwise respectable gaming hardware, Skyrim's minimum PC requirement is actually pretty easygoing. But Hines made it clear that while the minimum spec will be playable, not even the recommended spec will let players go completely balls-out.


"The Min specs get you playing. The recommended specs let you play on High, not on Ultra," he wrote. "You'll want (a) beefier rig for that."

The Elder Scrolls V: Skyrim comes out on November 11 for the PC, Xbox 360 and PlayStation 3.