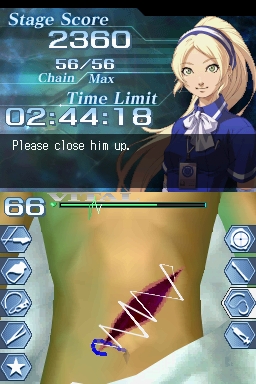 It's official: Playing videogames adds +5 to your surgical skills.

Nick Bilton of the New York Times Bits Blog has a new book called I Live in the Future and Here's How It Works. Within it is a chapter titled "Why Surgeons Play Video Games" where - according to Bilson - the latest research shows a lot of data supporting the theory that surgery skills increase when a doctor happens to be a gamer:

A few years ago, researchers quizzed more than thirty surgeons and surgical residents on their video game habits, identifying those who played video games frequently, those who played less frequently, and those who hardly played at all. Then they put all the surgeons through a laparoscopic surgery simulator, in which thin instruments akin to extremely long chopsticks are inserted into one or more small incisions through the skin along with a small camera that is inserted into an additional small opening. Minimally invasive surgery like this frequently is used for gallbladder removal, gynecologic procedures, and other procedures that once involved major cutting and stitching and could require hours on an operating table.

The researchers found that surgeons or residents who used to be avid video game players had significantly better laparoscopic skills than did those who'd never played. On average, the serious game players were 33 percent faster and made 37 percent fewer errors than their colleagues who didn't have prior video game experience.

The more video games the surgeons had played in the past, the better their numbers.

Additionally, Bilton notes that researchers at Arizona State University have followed surgical residents, some of whom trained for laparoscopic surgery by using a game called Marble Mania (along with a custom Wii remote). It turns out that the game-playing students made 47% fewer mistakes than others, and performed their surgeries up to 39% faster.

Note to self: When I move later this week and start searching for a new doctor, be sure to choose an office with a game console in the waiting room.

Source: Wired and BoingBoing, via io9