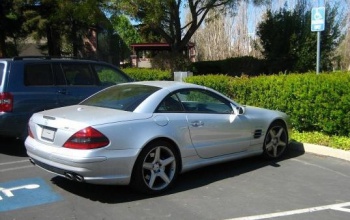 The deceased CEO of Apple found a loophole in California state law.

Like any prominent figure, there have been a lot of stories tossed around about all the crazy things Steve Jobs did and the official biography by Walter Isaacson published this week is bringing even more to light. In the 80s, Jobs denied a longtime Apple employee stock options, just because he could. He once called all the executives of a chip supplier "fucking dickless assholes" and drove a tank to work. All right, it wasn't a tank, but it was a Mercedes that had no license plates which Jobs was observed by multiple sources parking in handicapped spaces.

How did Jobs get away with not having a license plate on his car? According to a former employee named Jon Callas who is now the chief technology officer at Entrust, Jobs realized that California law gave the owners of new cars six months to obtain a license plate. Armed with that knowledge, Jobs made a deal with his leasing company to get a new silver Mercedes SL55 AMG every six months, making sure that it was always legal for him to have an unmarked car.

"It's a little game I play," Jobs said to remain anonymous.

Of course, as biographer Isaacson pointed out to Jobs before his death, driving an unlicensed car is much more conspicuous than just putting a dang license plate on his car like everyone else.