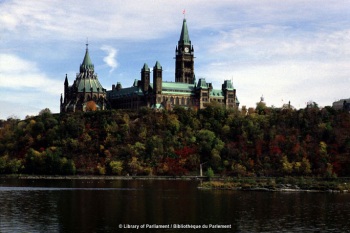 A Canadian politician says people don't need to worry about changes to the country's copyright laws because content creators probably won't bother to sue anyone anyway.

As you may be aware, the Canadian government is currently in the process of reforming the country's copyright laws to bring them in line with the requirements of the digital era. While there's a reasonable consensus that these reforms are necessary and even overdue, many experts have expressed concerns over "digital lock" provisions, which allow content creators to effectively trump consumer rights by embedding some form of DRM into their material. The nature of the DRM is irrelevant; as long as it is present, the illegality of circumventing it overrides any legal right to duplication or fair use allowed by law.

Opposition to the reforms hinge almost entirely on this single aspect of the law. But while most of the government either ignores or glosses over questions about digital locks, Conservative MP Lee Richardson, a member of the Standing Committee on Industry, is selling a slightly different story: people don't need to worry about it because nobody really cares anyway.

"If a digital lock is broken for personal use, it is not realistic that the creator would choose to file a lawsuit against the consumer, due to legal fees and time involved," Richardson wrote in a recent letter to a constituent. [PDF format]

I'm not sure what's more mind-boggling: the casual dismissal of outright illegality, the implication that these copyright reforms are more or less a waste of time or the suggestion - from an elected official, no less - that people can just go ahead and do whatever the hell they want anyway. A Canadian lawmaker actively encouraging Canadian citizens to knowingly break a law that his own party is at the same time aggressively trying to sell to the public as fair and friendly to consumers? It would be funny, if it wasn't so utterly appalling on every possible level.

As noted copyright critic Professor Michael Geist points out, even if Richardson's facile suggestion does have some rickety basis in reality - and I think we'd need to talk to people who've found themselves on the wrong end of an RIAA lawsuit before we made any firm judgments in that regard - it does no good for businesses, journalists, students or others who have to work within more legally restrictive frameworks. More to the point, it actually encourages disrespect for the same laws the Canadian government insist are badly needed.

"It is surprising to find Conservatives seeking support for their bill on the basis that Canadians need not worry about liability if they violate its provisions. Copyright reform is supposedly about updating Canada's copyright rules and fostering greater respect for copyright law," Geist wrote on his blog. "Yet the message from Richardson suggests the opposite since Canadians will have less respect for copyright law as even their MPs tell them they need not fear violating the law given the minimal likelihood of a lawsuit."

And if you do find yourself staring down the wrong end of expensive litigation? Maybe Richardson will pop by the courtroom and put in a good word for you.