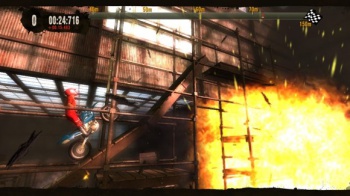 RedLynx has a bundle of different franchises under its belt, but Ubisoft seems to have a particular interest in the Trials series of femur-shatteringly fun dirt-bike obstacle course games. The latest title in the franchise, Trials HD is currently the sixth bestselling game on XBLA, having sailed past the 2 million sales mark back in May.

"The team at RedLynx has developed exceptionally strong digital brands that stand out for their high replay value, their long tail sales and their multiplatform positioning," said Ubisoft CEO Yves Guillemot.

"We are delighted to welcome RedLynx to the Ubisoft family. Their expertise in asynchronous online games and physics-based game mechanics provides us with a great opportunity to bring their powerful brands, most notably Trials, to an even broader range of fast-growing digital platforms."

RedLynx chief Exec Tero Virtala talked up the company's new big brother (It seems we're stuck with the slightly creepy family metaphor) in a press release. "We were attracted by Ubisoft's focus on creativity and quality, and the fact that they base their long-term strategy on both the traditional and digital distribution video game markets," he said. "The reality of today's market is not about platforms, it's about creating excellent gaming experiences that consumers can play on any device or screen they like."

Ubisoft's digital line-up is already pretty strong, with games like Beyond Good and Evil HD, Scott Pilgrim VS. The World: The Game and the superb Outland standing out as some of the best downloadable titles, period. Earlier this month, a Ubisoft rep said that the company was not planning to spend a fortune on acquisitions in order to break into the market. "We'll never stop looking for acquisitions," said Ubisoft's VP of Digital Publishing Chris Early "but it will be mostly smallish developers with great IP as opposed to buying our way into the market. We said let's do it organically and understand it as we build."

The upcoming Trials Evolution, which currently has a release date of "when it's done," will still be published by Microsoft, and will be the last game RedLynx develops as an independent studio.