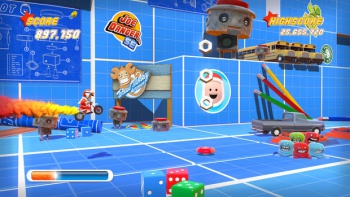 One of the PlayStation Network's best exclusives is exclusive no longer as Joe Danger makes the jump to Xbox Live Arcade.

Developed by British indie developer Hello games, the original Joe Danger saw minute, cartoon stuntman Joe boost his way through various obstacle courses on his trusty dirt bike. Part racer, part platformer, it played like a cross between Trails HD and Tony Hawk: Pro Skater, and needless to say we quite liked it. Now, 360 owners can get in on the action. The creatively titled Joe Danger: Special Edition, arrives on XBLA this holiday season and promises a new career campaign, new modes and new characters.

"We've come back to this game that we've now watched like hundreds of thousands of people play through on PS3," said Hello Games' Sean Murray. "We've decided there's so many things we never finished, or never really liked, and we've fixed them. One by one. The game was well received but there were actually places where it was pretty frustrating to play, it strayed into that area and I really think we've totally fixed that out now."

Unfortunately, while 360 users are getting a bigger, better version of the game, PS3 users are getting diddly squat. "That's just not something we are thinking about right now, if I'm honest," Murray told Destructoid, when asked if the new content would make its way to PSN. "Anyway, my assumption right now is that what people really want is the other things we're working on. Things like Joe Danger 2 The Movie, and other stuff we haven't even announced yet."

Traditionally it's PS3 users who've had to wait a couple of months for an improved version of a timed exclusive, though perhaps these features are what's needed to get the game past Microsoft's policies regarding non-exclusive titles.

Hello Games has previously made use of Sony's "Publishing Fund," which offsets production cost with royalties in exchange for, presumably timed, exclusivity. Murray himself has said that the PlayStation Network was "the only way we could self-publish," and he once claimed the XBLA platform was "kind of a slaughterhouse for small developers," which makes the announcement of an XBLA version of the game surprising, but certainly not unwelcome.