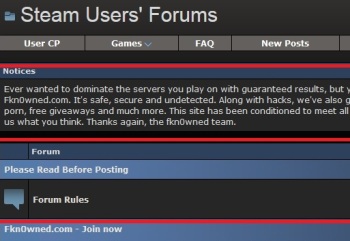 But in a fun twist, Fkn0wned denied that it had anything to do with the mess and actually ended up taking its own forum down for awhile following the Steam blowup, although they've since been restored. "Fkn0wned Forum is currently unavailable In lights of someone crediting us for the recent breaches of steam forums, the board is offline," a message posted on the site said. "Fkn0wned is not responsible."

Valve hasn't said anything about the matter yet, which optimists might take as a sign that there's nothing to worry about; but Sony took awhile to speak up about the PlayStation Network breach too and we all know how that worked out. I'm not suggesting that this is anywhere near the scope of that, but a change of password might be in order anyway.

Source: Kotaku, thanks to The_root_of_all_evil for the tip.

Is Now a Good Time to Play MechWarrior Online? Slycne 11 Comments
Comments on