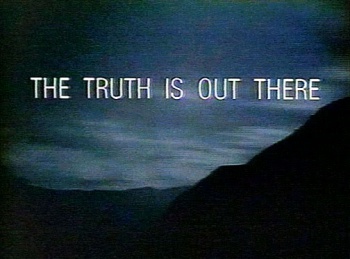 Seriously guys, there are no aliens. Would the government lie to you?

After receiving two recent petitions (which collected over 17,000 signatures) asking that the White House come clean about the United States' knowledge of extraterrestrial life, the heads of our government have issued a formal, official response:

Thank you for signing the petition asking the Obama Administration to acknowledge an extraterrestrial presence here on Earth.

The U.S. government has no evidence that any life exists outside our planet, or that an extraterrestrial presence has contacted or engaged any member of the human race. In addition, there is no credible information to suggest that any evidence is being hidden from the public's eye.

Continuing, the reply offers information on a number of research initiatives searching the skies for signs of life, including SETI and NASA's Kepler spacecraft.

As a final point, the White House addresses the statistical probability of intelligent life -- likely in an effort to head off any pedants just itching to say the same:

A last point: Many scientists and mathematicians have looked with a statistical mindset at the question of whether life likely exists beyond Earth and have come to the conclusion that the odds are pretty high that somewhere among the trillions and trillions of stars in the universe there is a planet other than ours that is home to life.

Many have also noted, however, that the odds of us making contact with any of them-especially any intelligent ones-are extremely small, given the distances involved.

But that's all statistics and speculation. The fact is we have no credible evidence of extraterrestrial presence here on Earth.

So there you go. I realize you would-be Mulders are going to immediately decry this response as a smokescreen for Majestic 12 or say that this is clear evidence of Illuminati influence, but c'mon people. Let's be mature about this.

Even assuming that there are aliens that the government wants to keep under wraps, I think it's pretty obvious that the shapeshifting lizardmen who rule mankind from the shadows have an excellent reason for keeping it from us.