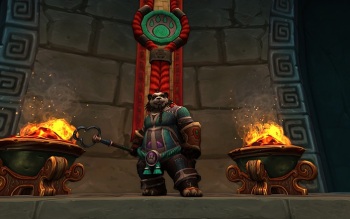 World of Warcraft shed another 800,000 subscribers over the past quarter.

The third quarter was a good one for Activision, which saw a big jump in profits driven in large part by a 57 percent increase in digital sales. But it wasn't such a good time for World of Warcraft, which dropped another 800,000 subscribers, slipping from 11.1 million players at the beginning of July to 10.3 million at the end of September.

The biggest losses are in China, Blizzard CEO Mike Morhaime said in an investor's call, although the game is still "one of the most popular online games in China and remains by far the most popular subscription-based MMO in the world."

He also touched on an update expected in the near future which will add new content and raids to the game. "It's really not intended to go out and drive new user acquisition, that's a whole other strategy," he said. "But it does drive engagement with the game, and so that will impact the churn if we do it successfully, and will eventually drive winback, as players tell each other about the content they're enjoying."

Blizzard announced a new World of Warcraft expansion, Mists of Pandaria, in October. No release date has been set, but it will no doubt provide a significant bounce to WoW numbers when it hits.