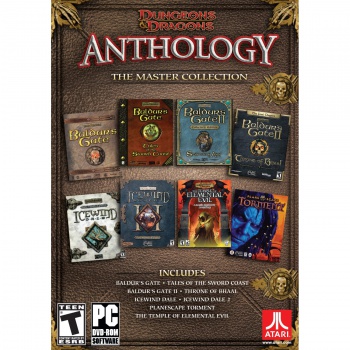 A new bundle offers six of the best isometric RPGs ever made for only twenty bucks? Hamsters and rangers everywhere, rejoice!

There are many gamers who miss the days of unwinding a solid story, finding +2 weapons with ostentatious names, and trying to decide how many hexagons they'd need to travel before summoning a Cacofiend from safety. But, even though mainstream game developers have long since left the isometric grids of yesteryear behind, RPG lovers can still relive some of the most timeless gaming experiences ever crafted by replaying their favoites. Next week, Atari is releasing a brand new bundle of these classic games for a ridiculously low price.

The Dungeons & Dragons Anthology: The Master Collection will include six RPG classics and all of their expansions for one measly green portrait of Andrew Jackson. Here's what you'll get for the twenty bucks:

If the hundreds of hours you'll spend hunched over your PC from that packaged goodness aren't enough, Atari will also be releasing a second bundle called Dungeon & Dragons: Neverwinter Nights Complete for thirty bucks which will include:

If you've heard of these games, but never made the time to check them out, this sounds like a pretty opportune moment to take the plunge. The Baldur's Gate series alone is almost universally known as one of the greatest examples of the RPG genre to date (and was even recently voted top game in a survey of game developers), but Icewind Dale and Planescape: Torment are certainly no slouches in the role-playing department either. Sure, it's not as exciting as an HD remake or Baldur's Gate 3, but gamers could do a whole lot worse than finding a legit copy of so many classics already tooled for today's PCs in one package with a cheap price tag.

Both bundles are currently available for preorder at GameStop, Target, and Amazon.