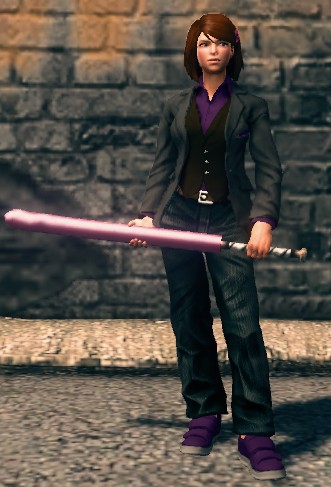 Apparently there are some things you just can't show in a videogame in Japan, like veins.

One of the oddest moments early on in Saints Row: The Third happens when you walk into a weapons shop and look at the melee implements for sale. What's the big purple thing? Oh. That's ... amazing. Wielding it on poor unsuspecting souls in Steelport is one of the weird joys of SR3, but reports are coming in from Japan that their localized version is not quite so life like as the North American version of the gang simulator. The "Penetrator" in question has been smoothed out and the wobbly physics have been removed. That's right, Japan has censored the big purple dildo.

The law in Japan states the "depiction of genital parts" is illegal, and the big floppy member was apparently in violation of that statute. Instead of removing the weapon from the game or pixelating the image like I've seen in some Japanese videos - my friend told me about that, I've never actually seen them *cough* - Volition decided to remodel the Penetrator for the Japanese release.

GameInformer was able to snag screenshot of how the Japanese Penetrator looks. Is it just me or is that just a huge flesh-colored lightsaber?