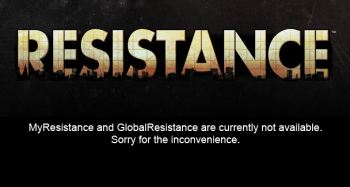 The website and forums for Sony's Resistance franchise have been forced offline by hackers.

The cause for the disappearance of MyResistance.net over the weekend will probably come as no surprise to anyone: hacker shenanigans. Late last week, a few days after some untoward business brought the Steam forums down - and by the way, they're still out of action - reports started flowing that Sony's Resistance site, which offers support and forums for the Resistance series of games as well as the free-to-play Global Resistance game, was pumping out malware to its users. Shortly after that, it went offline completely.

"SCEA discovered unexpected activity on its Resistance website, MyResistance.net, which includes the Resistance forums and the online free strategy game, Global Resistance," Sony told Kotaku. "As a result, the website was taken down. MyResistance.net does not collect any credit card information, and we are working to get the site back up as soon as possible."

The credit card thing is good news but 1Up noted that email addresses and passwords could be at risk, so if you're in the habit of using the same combo for all the sites you visit, you might want to change things up a bit.

The malware allegations are unconfirmed at this point and who's responsible for all this dicking around or why they're doing it - assuming there's a higher purpose than mere lulz - remains a mystery. I think I can speak for most of us, however, when I say that I wish you'd knock it off.