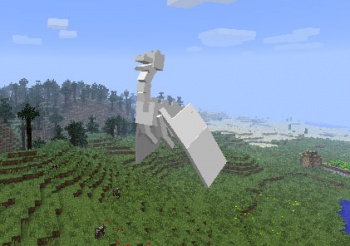 "Finished" in the technical sense of the word; the indie world-building hit Minecraft has left beta and gone gold.

Thus tweeted Minecraft creator and Mojang AB founder Notch early this morning. Minecraft 1.0, or simply Minecraft, will be available to download on November the 18th. Though this technically means the game is ready for release, it doesn't mean it's completely done, as Notch has promised Mojang will continue adding features for "a long time after the full release."

The end of the beta does Minecraft will now be sold for full price. If you want that 25% discount for purchasing the game during its extended beta, you've only got a couple of days left to come up with the ducats.

While Notch has called the 1.0 release a "huge milestone," he's also voiced worries that now the game is finished, it's going to attract professional game reviewers and their pesky opinions. Notch doesn't seem to have much faith in the great video-game-journalism machine.

As he said on his blog, last week:

"It does feel like the game has already proven itself. Lots of people play the game, and we receive a lot of friendly and positive emails from players. We've won several amazing awards, so several people in the industry seems to enjoy what we've done.

Now it's just the press left.

It's a bit weird, but gaming scores have become so big and bloated, I can't help but feel like I would be disappointed with a score that would be a great score for something like a movie or a music album. And even if the score means relatively little compared to the players and the awards, it's a distinct number people will use to compare the game to other games."

While I don't think any journalist worth their salt will find much fault with Minecraft, it'll be interesting to see how the game fares now that "it's a beta" is no longer a blanket excuse for its various quirks and/or bugs.