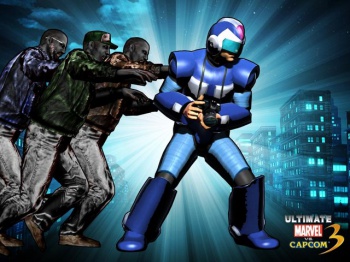 In a surprising show of transparency (and likely as something of a mea culpa for the aborted downloadable content plans of the original Marvel vs Capcom 3), Capcom has laid out its entire schedule of upcoming DLC costumes for the Ultimate Marvel vs Capcom 3 cast.

According to Capcom, each individual pack will set you back $4, regardless of whether you buy them via the PSN or the Xbox Live Marketplace.

As for those six DLC costumes the company did manage to release for Marvel vs Capcom 3, Capcom says that if you already purchased that pack, the new costumes for Ryu, Thor, Captain America and the rest will transfer directly over to UMvC3 free of charge.

If you're curious as to what is actually included in these costume packs, GameSpot has been putting together an incredibly comprehensive pictorial of all the additional costumes. As loathe as I am to promote the work of others, it's a solid read for any fans of the series, and the pictures detail the ridiculous amount of fan service Capcom has planned for these DLC additions.

Oh, and that picture at top? Of Dead Rising's Frank West dressed as Mega Man? There's also a Mega Man costume for Zero. I think it's pretty apparent that Capcom is just straight up trolling fans of the Blue Bomber at this point.