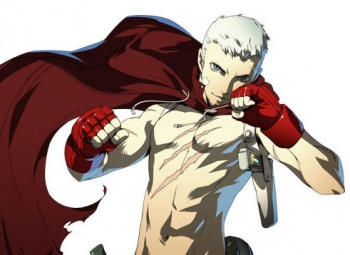 A new batch of screenshots from Persona 4: The Ultimate In Mayonaka Arena include a shirtless Akihiko and a sword-wielding Mitsuru in fetish gear.

Though we have yet to hear of a release date for Atlus' upcoming Persona-based fighting game, or even if it's coming to Western shores, imagery from the game continues to slowly leak out. Despite all the mystery surrounding the title, at least we know that it's going to look really, really cool, right?

The latest batch of pictures focuses on Mitsuru Kirijo and Akihiko Sanada from the phenomenal Persona 3. Both characters sport a more mature, decidedly more threatening look in the fighter, with Mitsuru looking like a futuristic Joan of Arc and Akihiko apparently fresh from fist-fighting a bear.

Other than that, these new images reinforce the idea that this game is something of a mashup of Persona canon and Guilty Gear-style, hyperkinetic 2D fisticuffs. Which is appropriate given that it's being developed by Arc System Works, though how all this will actually function once the game is available to the public remains to be seen.

If, after perusing the gallery below, you want to see more of the game, have a look at our earlier coverage. It won't answer any of the crucial questions I failed to answer above, but it will give Persona fans even more reason to salivate over the game.