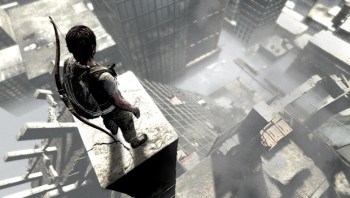 Ubisoft is well aware that PC gamers are "bitching" about not getting a version of the upcoming I Am Alive, it just doesn't care.

In a way, given Ubisoft's recent track record with the PC market, this sort of dismissive talk isn't all that terribly surprising. Still, the sheer in-your-face ballsiness of this guy's attitude toward the PC version of I Am Alive and those who might want to play it is kind of shocking.

"We've heard loud and clear that PC gamers are bitching about there being no version for them," Creative Director Stanislas Mettra told IncGamers. "But are these people just making noise just because there's no version or because it's a game they actually want to play? Would they buy it if we made it?"

I guess we'll never know because Ubisoft has apparently decided not to make it. Mettra wasted no time going straight to the same tired old excuse to justify excluding the platform. "It's hard because there's so much piracy and so few people are paying for PC games that we have to precisely weigh it up against the cost of making it," he continued. "Perhaps it will only take 12 guys three months to port the game to PC, it's not a massive cost but it's still a cost. If only 50,000 people buy the game then it's not worth it."

50 thousand unit sales is nothing to write home about, sure, but as Rock, Paper, Shotgun noted, we're talking about a digital release of a PC port of an Xbox 360 game. You release the thing on Steam for 20 bucks a pop, Valve takes its cut and 50,000 units later you're taking home 700 large - not a lot of money in today's industry but enough, I would think, to be "worth it." And if the game sells better, which despite Ubisoft's best efforts in the DRM field is always a risk, you could be looking at substantially more.

I suppose, in the spirit of the season, that we might be thankful for this in some ways. Instead of losing our minds with rage over yet another potentially good game brought low by Ubisoft's idiotic DRM, we can just ignore this one completely right from the get-go. It's not an ideal situation but under the circumstances, it's an upside I'm willing to take.