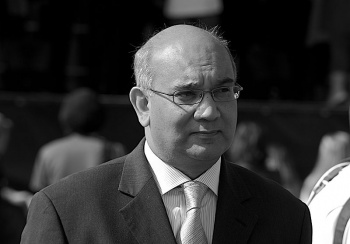 Notorious game-hater and U.K. Parliamentarian Keith Vaz has tabled an "Early Day Motion" expressing concern about Modern Warfare 3 and the link between videogames and real-world violence.

Keith Vaz, for those who aren't familiar with the name, is basically the U.K.'s equivalent of Leland Yee. He claims to like videogames despite a tendency to blame them for all the ills that plague modern society, and he uses the release of high-profile titles like Modern Warfare 3 to score easy political points among constituents who don't know any better. In fact, here's a surprise: Modern Warfare 3 is the latest target of his political grandstanding.

"That this House is deeply concerned about the recently released video game Call of Duty: Modern Warfare 3, in which players engage in gratuitous acts of violence against members of the public," he said in an Early Day Motion tabled earlier this month. "[It] notes in particular the harrowing scenes in which a London Underground train is bombed by terrorists, bearing a remarkable resemblance to the tragic events of 7 July 2005; further notes that there is increasing evidence of a link between perpetrators of violent crime and violent video games users; and calls on the British Board of Film Classification to take further precautions when allowing a game to be sold."

What further precautions could the BBFC take, aside from ruling that the sale of the game to anyone under the age of 18 is illegal? Vaz didn't say but it's not too hard to imagine that he longs for the good old days when the rating agency packed a bit more of a hair-trigger banhammer. Fortunately, Vaz's fellow MP and Labour Party member Tom Watson proposed a rather thorough amendment to the motion expressing support for the game and the BBFC.

"Leave out from 'House' to end and add 'notes that the British Board of Film Classification (BBFC) gave the video game Call of Duty: Modern Warfare 3 an 18 classification, noting that 'the game neither draws upon nor resembles real terrorist attacks on the underground'," the amendment says. "'[It] further believes that the game has an excellent user interface and challenges the gamers' dexterity as well as collaborative skills in an outline setting; and encourages the BBFC to uphold the opinion of the public that whilst the content of video games may be unsettling or upsetting to some, adults should be free to choose their own entertainment in the absence of legal issues or material which raises a risk or harm'."

Based on my understanding of Parliamentary procedure, neither the original motion nor the amendment actually mean a whole lot. The former is Vaz doing his best to stay in the spotlight; the latter is Tom Watson messing with him. And you thought the inner workings of government were dull.

Extra Punctuation: What Is the Matter with You People? Yahtzee Croshaw 429 Comments