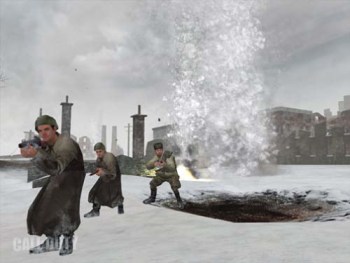 Former Activision exec Dusty Welch says his new studio intends to "dethrone" Call of Duty with a top-quality, free-to-play shooter that runs in a browser.

We all know what Call of Duty is, but who is Dusty Welch? A crash course for those of you who don't have internet access: he's not a developer but his time with Activision stretches back to the mid-90s, when he served as the company's senior director of global brand management. In the years since, he's overseen a lot of big-name Activision titles including just about every id Software title released since Quake, Vampire: The Masquerade: Bloodlines, Star Trek: Elite Force 2, numerous Guitar Hero games and every Call of Duty release from the original in 2003 all the way up to World at War.

And now he's stepping out on his own as the founder and CEO of U4iA ["Euphoria," if you haven't figured it out for yourself already] and he's setting his sights high: he wants to take out the great Call of Duty behemoth he helped build.

"I created Call Of Duty to dethrone the established leaders back in the early 2000s, and you bet my goal at U4iA is to repeat that success again," he told GamesIndustry.biz. "Providing a AAA, first person shooter experience in a browser is really what the end game is for us. And I think that's going to help lead the new dynamic and a transition of gamers into the social."

Browser-based and social though it may be, Welch said he's aiming directly at the core gamer market with the new project. Details aren't yet available but when it comes time to unveil it to the world, he said it will be important to ensure that consumers understand exactly what they're in for. "We're going to fish where the fish are, we're going to go after and target core and active gamers," he explained. "We are making a great AAA game for active and core gamers that happens to be available on the more social platforms."

Call of Duty isn't U4iA's only high-profile target. Welch also said that he hopes to match or exceed the numbers put up by Riot Games' free-to-play League of Legends, which recently hit a staggering 11.5 million monthly active users. "I think that yeah, U4iA can match or exceed the user base that Riot is experiencing today," he said. "Much bigger genre, sticky proposition, e-sport competitive first person shooters are the hallmark of why so many gamers are playing on Xboxes and PlayStation 3s today, and we're going to provide a whole unique way to experience that in a AAA free-to-play package."