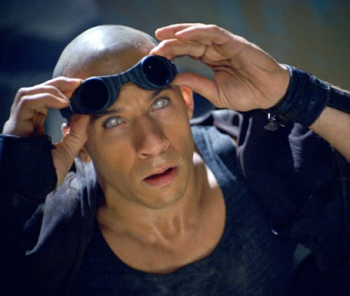 A month after financial problems got crew members locked out of the studio, the next Riddick movie is reportedly starting back up.

Earlier this month, Vin Diesel's new Chronicles of Riddick movie was in some pretty serious financial trouble. Diesel himself was considering working for scale, crew members weren't getting paid, and the owner of the studio had locked everyone out because the production company was behind on rent. Now, though, the problems have apparently been solved.

TMZ is reporting that all the bills have been paid and production is beginning to start up again:

But things have FINALLY changed ... so says studio owner Michel Trudel, who claims the production company recently paid up ... and he's willing to allow the flick to pick up where it left off.

However, not all of the financial issues are taken care of yet. Some crew members are reportedly still complaining about how they have yet to receive their backpay. Sources close to the film state that production company One Race Films is on schedule to pay everyone before filming starts up again on December 28th.

Source: TMZ via Den of Geek