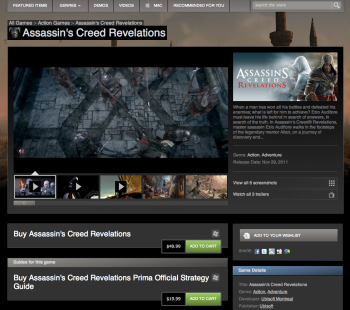 PC gamers, rejoice! Assassin's Creed: Revelations just leapt out of the shadows and is now available for Windows ahead of its original December release date.

While Assassin's Creed: Revelations launched for consoles a couple of weeks ago, Ubisoft was a little coy about the PC build's release date. The publisher originally planned to release the game for PC sometime in December, but the PC version is now available.

The PC release includes Steam, though Joystiq is reporting that it won't be available until tomorrow (December 1st) if you live outside North America. Additionally, the game won't use the much-maligned "always-on" DRM.