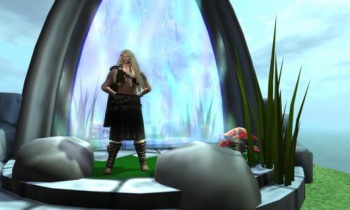 Second Life is many things: An online virtual world, a showcase for user creativity, and a safehaven for the endangered Flying Wang of Doom. One thing it hasn't exactly been known for, though, is games created by Linden Lab. All that's about to change, though, thanks to Linden Realms - the new game within Second Life that was developed by Linden itself - which just launched its today.

Billed as "Second Life's only substantive first-party game", Linden Realms was originally in beta, only available to Premium subscribers. Now, though, it's in unrestricted beta and sounds like it's a pretty simple beginning for something that will hopefully become much bigger:

Linden Realms is a fun little game about collecting crystals, completing quests and dodging hazards. The game is not just moving from a premium-only beta to an unrestricted beta - this is the public launch of Linden Realms, says the Lab.

In order to access Linden Realms games, you just need to to go to one of the pictured portals, which have their own section of the Second Life Destination Guide. All you have to do is walk your avatar into the portal and you'll be transported to one of the game areas.

Source: Dwell On It via Massively