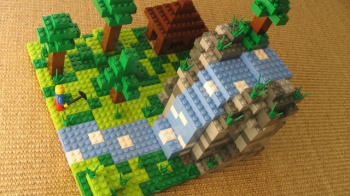 Mojang wants to give Minecraft builders the tools to take their creations into the real world.

Mojang is currently working with Lego to bring Minecraft into the physical world with an entire set of blocks fashioned after the ones in the game. The announcement came from Mojang spokesman Daniel Kaplan in the form of a Tweet. "We are working directly with Lego to make this happen," it read.

The collaboration stems from community support on Lego's Cuusoo website, which encourages fans to suggest ideas for new block sets or show their support for ones currently being considered. Needless to say, the Minecraft set found massive support as soon as it was posted. So much in fact, the site has been intermittently crashing from traffic since the announcement that Mojang is officially on the case.

"Seeing LEGO Minecraft sets is also our dream," wrote a representative of Mojang on the Cuusoo website, "so we linked to one of the projects. It's clear to us that there are many creative people with good ideas for this and we want to throw our own hat into the ring and start this project to bring the best LEGO Minecraft builders together."

Mojang has also promised any royalties it makes from the project to charity.

Minecraft and Lego are like peas and ... well, other peas. In fact, it seems such an obvious combination that I wonder how much fun this toy will actually be. Basically, builders will be building the island, so, grass, trees, and water. I seem to recall doing that with green, brown, and blue blocks with my regular Legos, and only as somewhere to park the mega robot death laser tank mech I just finished. Still, a lot of the fun in Legos comes from the aesthetics of different sets, so I'm sure there will be more than a couple of Minecrafters ready to line up at the toy shop.