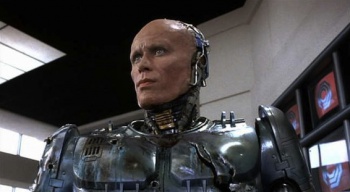 How do you make Star Trek 2 even better? Just add the dude who played Detroit's cyborg guardian.

J.J. Abrams' highly-anticipated sequel to Star Trek is finally picking up steam, acquiring a rather impressive cast (in addition to the original movie's), including Alice Eve and Benicio Del Toro. However, it's just been announced that Peter Weller will appear in the sequel, which means that the nerd crossover fantasy of Robocop and Star Trek is about to take place. Sort of. Okay, not really, but it's fun to imagine.

Variety is reporting that Weller, who's best known for portraying Robocop (only in the first two movies, though) and the main character in The Adventures of Buckaroo Banzai Across the Eighth Dimension has just been added to fill out the big-name cast. Weller is reportedly going to play the sidekick to the villainous Del Toro (who is rumored to be playing Khan Noonien Singh - though nobody will either confirm or deny this). Also, this isn't the first time that Weller's appeared in the Star Trek universe: He played John Frederick Paxton during a couple of episodes on the oft-maligned Star Trek: Enterprise.

Even though Weller is best remembered for his portrayal of Alex J. Murphy, I've always enjoyed him when he appears as a villain. He was a delightful distraction as Stan Liddy on Dexter and he was certainly menacing when he appeared as Alistair Peck in Fringe. What will be interesting to see, though, is just who Weller - and, concurrently, Del Toro - will actually be playing in the sequel. When you've got Robocop and the Wolfman working together, that's quite a team-up.