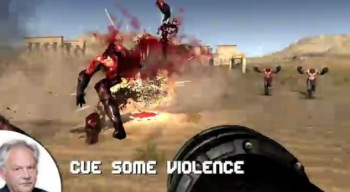 A study out of Sweden says that children who play violent videogames are more aggressive but there's no evidence that it's the videogames that actually cause the aggression.

If you've paid any attention at all to the back-and-forth debate about the connection between videogames and real-life violence, you've no doubt heard the phrase "correlation does not imply causation" at least once. And that is apparently the conclusion of the Swedish Media Council, which conducted a review of over 100 articles about violent videogames published in various "international scientific journals" over the past decade.

The council concluded that there is a "clear, statistically significant link" between violent videogames and aggressive behavior, but said that a great deal of the research "suffers from serious methodological deficiencies" and fails to establish a causal relationship between gaming and aggression. Furthermore, the few studies that considered other causes of aggression found underlying factors like poor health and family problems that could explain not only the violent behavior but also the great tendency toward playing violent videogames.

In other words, "There is no evidence that violent computer games cause aggressive behavior," the council said.

Studies indicate "beyond a reasonable doubt" that life issues like problems at home can drive kids to play more videogames and lead to heightened levels of aggression, researcher Ulf Dalquist said, but then all that business about correlation and causation gets in the way. "If research can't provide any simple answers about how games make children aggressive, perhaps we adults should stop judging the games children play based on whether they are violent or not," he said in a statement.

But even though games may not cause aggressive or violent behavior among children, parents should stay on top of what their kids are playing. "As parents, we can stand and freeze on the sidelines of a football pitch or listen to out of tune recorder concerts - but we can't engage in their computer gaming," Dalquist told Aftonbladet. "It may not be about how much violence a game contains, but rather what sort of values the game expresses."