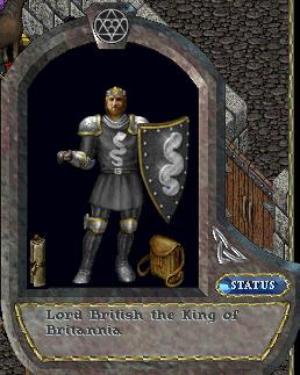 Whether or not Ultimate RPG lands in Britannia is up to EA, not Lord British.

During a recent interview with Eurogamer, Richard Garriott has revealed that his upcoming project, somewhat codenamed Ultimate RPG, could literally become Ultima Online 2 if Electronic Arts decides to get on board. According to Garriott, he's already been in "discussions at very high levels" regarding the possibility.

Garriott began speaking of his new project not too long ago on Facebook, describing it as "a deep, beautifully realized highly interactive virtual world." According to his initial descriptions, the game will draw from many of the successes of popular social networking games while being available on every platform possible. The decision of whether or not the game comes as official Ultima canon is firmly in the hands of EA, which seems to be presently undecided on the matter.

"Electronic Arts is a big company," he said. "There are some parts of the organization that would love and embrace and clearly understand the logic of 'wouldn't it be great to work together on an Ultima'.

"So far we've not put a deal together, but of course, yeah, I would be very open to it."

Regardless of whether or not a deal is struck with EA, Garriott holds that the title of a property has little to do with it's content, claiming that it's "principles of design" that make "an Ultima an Ultima." Because of that, he believes gamers will intrinsically understand Ultimate RPG as a spiritual successor to Ultima Online regardless of the lettering on the box.

During the same interview, Garriott also announced some additional details about the upcoming game, including that it's going to be free-to-play (read: microtransactions), "closer to the Minecraft route" than Star Wars: The Old Republic, and that it's going to support both "synchronous and asynchronous multiplayer."

As for when it's coming out? "Who knows?" he said. "As soon as possible, but a year or two. We'd be very excited if we could do it in a year. And if it took two years, then so be it."