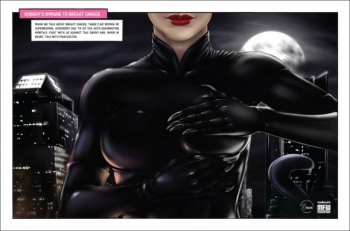 Wonder Woman, Storm, She-Hulk and Catwoman are grabbing their norks for cancer awareness.

So, how do you feel about breasts? I'm quite fond of them as a rule. You could call it a passion. I subscribe to a number of publications that ... well you get the idea.

The picture on the right was taken from an ad campaign ran by the Associação da Luta Contra o Cancer, a breast cancer awareness foundation based in Mozambique.

"When we talk about breast cancer, there's no women or superwomen. Everybody has to do the self-examination monthly. Fight with us against the enemy and, when in doubt, talk with your doctor," reads the caption.

The fact both Marvel and DC characters appear in the campaign raises some question as to whether the campaign is officially sanctioned by either company (it also ruined a great crack about The New 52 I was going to use in the opening paragraph); perhaps the fact the character's faces are just out of shot isn't entirely just for effect, if you catch my drift. The art was provided by Mozambique-based Deviant Art user ~Halfy.

Women get these, and all us guys get is a bunch of berks growing hideous facial hair? How is that fair?