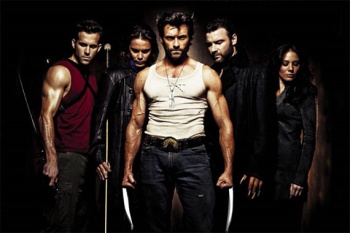 Be careful what you do with the bootleg DVDs you buy at Chinese restaurants.

It's easy to snicker at the FBI pirating warning before films. "Up to five years in a federal prison?" That never really happens, right? Right? Well, just ask 49-year-old New Yorker Gilberto Sanchez who uploaded an early copy of X-Men Origins: Wolverine to Megaupload one month before its 2009 theatrical release. He's likely someone who just starting taking it much, much more seriously.

The file Sanchez uploaded wasn't your standard early screener or cam copy. His film was actually a "workprint," meaning much of the postproduction wasn't even finished yet. People who watched it were privy to all sorts of incomplete weirdness, including greenscreens, acrobatic wires/harnesses, and rubbery Wolverine claws (though, to be fair, I thought they looked a bit rubbery in the final copy as well). The release of this copy became so widespread that even Hugh Jackman commented on it, calling it a "Ferrari without a paint job."

According to Sanchez, he obtained the film from "a Korean man in a Chinese restaurant" for $5.00. After dinner, he watched it with his grandchild, then uploaded it to the internet under the handle "SkillyGilly." Eight months later, the FBI tracked him down and now, in 2011, he's been saddled with a nasty 365 day jail term in federal lockup, followed by an additional year of supervised released with "limited access to computers" (sort of a lamer version of what happens to Zero Cool in Hackers).

Whether you think X-Men Origins: Wolverine was a "Ferrari" or a 1993 Toyota Camry in only decent but sellable condition, pirating the product of thousands of people's work and millions of invested dollars isn't very nice, especially if you release it unfinished a month before it hits theaters. Whether or not a year in prison is a just punishment for the crime is for someone else to decide.

Deadpool - This is a Self-Aware Review Title Marter 32 Comments