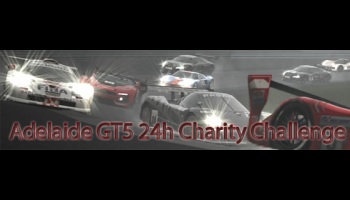 A group of Australian gamers is recreating the 24 Hours Nürburgring endurance race in Gran Turismo 5 to raise money for the Child's Play Charity.

Australian gamers do tend to get the short end of the videogaming stick, but that doesn't stop them from being stand-up dudes when it comes to doing a solid for the kids. And beginning on Boxing Day - that's December 26 for you non-Commonwealth types - six of them will strap on helmets, gloves and fire-retardant suits and put the virtual pedal to the simulated metal in the "Adelaide GT5 24 Hour Charity Challenge" to raise money and awareness for Child's Play.

On one hand, yes, it's pretty close to the far more famous Desert Bus for Hope; on the other, the Desert Bus doesn't average 120 MPH through the vicious twists and turns of Germany's Nürburgring Nordschleife for 24 solid hours, split between just three drivers in eight hour shifts. The Adelaide GT5 24h Challenge is a bit more competitive, too, as two teams of three will compete to finish the most laps over a 24-hour period.

The flag drops at 12:30 PM Australian Central Standard Time, which apparently translates to 9 PM EST on December 25 in North America, and the whole thing will be broadcast live at gt5charity.tk. There will be also be interactive demonstrations on such topics as suspension settings, drifting, correct racing lines and the theory behind achieving optimal speed - there's more to it than just standing on it, you know - and questions and suggestions via the live chat service are welcome.

It's serious business for a seriously good cause, but it'll probably be a lot of fun, too - at least for those of us not stuck behind the wheel for eight unbroken hours on a 15-mile track.

Gallery of the Day: 8 Historical Moments that Deserve a New Video Game ffronw 17 Comments
Comments on