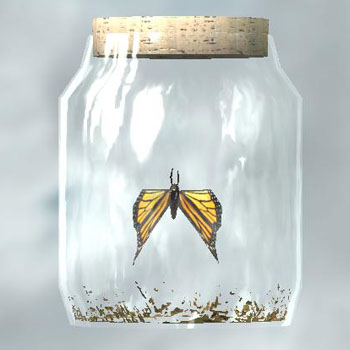 The Elder Scrolls V: Skyrim may be full of bugs, but according to dedicated fans of the game, there's an ominous reason for that.

Wait, did you think I was referring to coding bugs? Granted, Skyrim has its share of those too, but today we're talking about the creepy crawly kind.

Throughout the frozen wasteland that plays host to the game there are a number of bugs trapped inside various jars. If you've played the game for an extended period of time, you've likely found one of these imprisoned creatures only to assume that it serves no purpose beyond adding a bit of flavor to the detailed fantasy world. A group of Reddit users with far too much time and an abundance of creative reasoning skills however, has discerned a far more sinister purpose behind the glass prisons.

Specifically, these bug jars seem to be a primer on how to summon the apocalypse.

See, the lid of each jar is emblazoned with a rune that when translated from the language of the dragons into English offers a vague description of a location within Skyrim. Weird, right? Man, you ain't seen nothin' yet.

Take this proposed theory, for instance:

Someone noticed the connection between the five cities Morthal, Whiterun, Winterhold, Dawnstar, and Windhelm, and realized they formed a Pentagon. He also noticed three dragon "sanctuaries" or whatever you may call them, Mzinchaleft, and the Tower Stone formed a smaller pentagon within it, making a transmutation circle. In the general area of the middle of the circle, there is a shrine to Talos with a circle of stones around it. His theory was that if you placed the bugs on their respective cities (see post for relation between bugs and cities), committed genocide in those ctities, kill the dragons at the dragon areas and the one that Mzinchaleft leads to, activate the tower stone, and wait for the "Promised Day".

Too morbid for you? Try this one then:

The second one expands upon the Weynon stones. The guy figured out that the Thalmor are trying to erase mankind from existence, and the things that are stopping them are the eight towers:

all of which were destroyed or deactivated. The most significant and only remaining one are the Brass Tower and Snow-Throat, or the Throat of the World. The Brass Tower was cast out of time. The tower may have a spiritual connection with Numidium, the brass god, and the disappearance of the tower and therefore Numidium may tie in with the disappearance of the Dwemer. Snow Throat is the only active one. Each of these towers have stones which bind them to Nirn, and the theorist concluded that the Weynon Stones bound Snow Throat. This is why the Thalmor have been waging war on Skyrim; so they can destroy Snow Throat or the Weynon Stones, either way destroying the last tower and wiping mankind from existence.

And those are just the two most fleshed-out explanations for these jars. The whole thread is full of grassy-knoll-level conspiracy theories. Even if Bethesda didn't intend for the game to have an undercurrent of shady menace foretelling the coming of Armageddon, the thread makes an entertaining read for those who have spent a hundred hours murdering Skeevers and shrugging off casual racism against the noble Khajiit.

Oh, and for the record, Skyrim's developers remain mum on the exact purpose of the jars. We asked, and they aren't saying a thing.