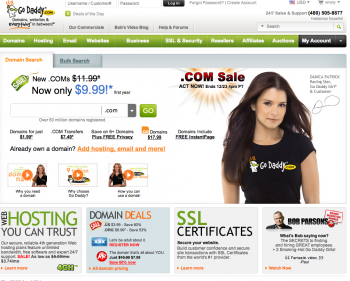 There are a lot of reasons that people hate domain name registrar Go Daddy. The company's no stranger to controversy, its services are pretty underwhelming, and let's not forget all those terrible wannabe softcore porn Superbowl ads they like to run (just a head's up, that link's borderline NSFW). Now, though, Go Daddy has stepped out from under the label of "controversial" and found a new position beneath "borderline suicidal" by announcing its support of the Stop Online Piracy Act (SOPA). Unsurprisingly, the collective users of the internet are lining up to hit the company where it'll do the most harm: Its wallet.

A little background on this issue: Back in November, Go Daddy filed a statement supporting the bill, claiming that "this debate is not about Hollywood vs. Silicon Valley. This debate is about preserving, protecting, and creating American jobs and protecting American consumers from the dangers that they face on-line."

Go Daddy's statement condemned the ease with which people are able to engage in illegal activities like selling fake drugs and sharing copyrighted material across the Web. However, the statement also completely dismisses any criticism of both SOPA and the Protect IP Act. Opponents of these bills have noted that the proposed legislation would come at a "terrible price" and hand way too much power to certain groups, which could easily lead to massive amounts of online censorship. According to Go Daddy, this isn't the case:

"This bill cannot reasonably be equated with censorship. This bill promotes action pursuant to preexisting criminal and civil laws. Not only is there no First Amendment concern, but the notion that we should turn a blind eye to criminal conduct because other countries may take oppressive steps in response is an affront to the very fabric of this nation."

Go Daddy doesn't seem willing to address concerns that the bill will, you know, break the internet.

Unsurprisingly, SOPA opponents aren't the least bit happy with Go Daddy's position. Over at Reddit, user "selfprodigy" started a thread that slams Go Daddy for supporting the bill. Selfprodigy, who is a small business owner, has vowed to transfer all 51 of his company's domains to another registrar; the move is proving popular with other users in the (now lengthy) thread, who are now promising to do the same thing and proposing making December 29th "Move Your Domain Away From Go Daddy Day".

Since the initial thread started up, calls to boycott Go Daddy have started springing up across Reddit. Competing domain name registrars have jumped on the anti-Go Daddy movement, to the surprise of absolutely no one. Namecheap, whose social media manager is actively involved in the discussion, has already offered discount codes (like "BYEBYEGD") for folks who want to move their domains away from the company. There are reportedly even discussions about the boycott within Go Daddy's own forums.

Now, Go Daddy is a massive company, with tens of millions of domains registered. On top of that, while the tech community and hardcore Web users are universally opposed to SOPA, the general populace (including my mother) doesn't really understand how bad this legislation is. As a result, Move Your Domain Away From Go Daddy Day may not have all that big an impact on the company's bottom line. That said, I certainly know a lot of people who won't be using the service any longer.