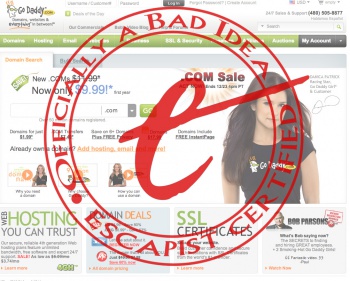 Well, that didn't take long, did it?

Yesterday, I reported on how Go Daddy was courting some serious nerd rage with its support of the Stop Online Piracy Act (SOPA). Users were calling for a mass emigration away from the domain name registrar, competitors were offering discounts to transfer domains away from Go Daddy, and just about everyone was dumbfounded that any Web company could openly support a piece of legislation that will break the internet. Go Daddy, realizing what PR disaster it had on its hands, has suddenly reversed its position and is no longer supporting SOPA.

When the online revolt began, Go Daddy was unwilling to change its stance. In a statement sent to Ars Technica, the company dismissed the planned boycott: "Go Daddy has received some emails that appear to stem from the boycott prompt, but we have not seen any impact to our business."

Surprise, surprise: This response only pissed people off further. Apparently people haven't been waiting until December 29th to start moving their domains away from the company, including celebrities like Ashton Kutcher, who tweeted to his millions of followers that he was joining the Go Daddy boycott.

Go Daddy has now done a complete 180-degree turn on its stance. In a follow-up statement to Ars Technica, newly appointed Go Daddy CEO stated, "Fighting online piracy is of the utmost importance, which is why Go Daddy has been working to help craft revisions to this legislation -- but we can clearly do better. It's very important that all Internet stakeholders work together on this. Getting it right is worth the wait. Go Daddy will support it when and if the Internet community supports it."

Go Daddy is also now claiming that, during SOPA negotiations, the company "fought to express concerns of the entire Internet community to improve the bill." Now, though, the company is admitting that SOPA's authors didn't address the concerns of internet users and engineers.

"In changing its position, Go Daddy remains steadfast in its promise to support security and stability of the Internet," the company said. This was followed by frantic promises that it had changed its ways, Baby, and that if you come back things will be different from now on. For real.

In all seriousness, this is a major triumph for SOPA opponents. Go Daddy clearly didn't think much of the Web revolt that was taking place and you people forced them to change their stance in less than 24 hours by hitting them where it counts: Their wallet.