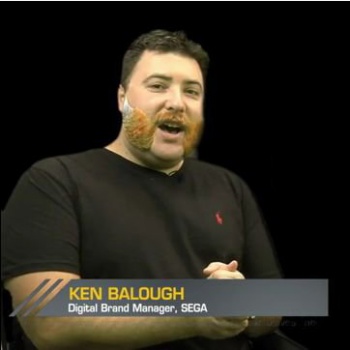 Sonic the Hedgehog is a videogame icon that used to rank up there with Mario, Mega Man and chocobos. But after Sega's bubble burst in the late 90s and some serious missteps in the early 2000s (Shadow, anyone?) definitely tarnished the brand. Sega tried to get back up on the proverbial hedgehog this past year by switching to a format more conducive to impulse and nostalgia - the XBLA and PSN game Sonic the Hedgehog Episode 1. While the side-scrolling levels hearkened back to the series' roots, the physics felt a little off for hardcore fans. And there was a little something missing. Well, have no fear, because Sega's brand manager Ken Balough revealed that Episode 2 would not only feature a new engine, but also the return of the sidekick Tails.

We know this because Balough shaved and dyed his beard to look like Tails' orange and white fur. Yep, he is that devoted to his job. What did you do to your facial hair for work this week? That's what I thought.

"I was playing with the idea of 'how do I really communicate episode 2? and the love that we have for it,'" Balough said, gesturing at the animal tail on his face. "I thought this was an interesting and creative way to let our fans know that this is what awaits."

So yeah, Miles "Tails" Prower will appear in the new game. Tails debuted in Sonic the Hedgehog 2 for the Sega Genesis, became a stalwart cast member of the series and even starred in few of his own titles (Tails' Skypatrol). Also, the villain will also be a returning character - Metal Sonic.

More than that, the physics and graphics engines are rebuilt and that was directly due to player feedback. "I want to reassure our fans that we listened," Balough said. "We are doing a lot of the things that fans requested. There's going to be a lot of really positive changes and we think the fans are going to be really happy.

Balough said that random uncurling when running uphill and sticking to walls will be fixed. "They may not sound like a big deal, but when you're playing Sonic and you're so used to the way the Genesis games felt, it's a big step to get closer to that Genesis feel."

Sonic the Hedgehog 4: Episode 2 will be out sometimes in 2012 for the download on Xbox Live and PSN, as well as mobile platforms like Android, Windows 7 Phone, and even iOS device. Yes, you will be able to play Sonic on your iPhone.