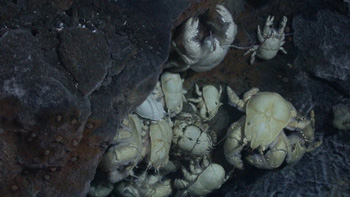 UK scientists have discovered a subspecies of Yeti Crab that bears a striking resemblance to cheese-ball, pop-star David Hasselhoff.

Thousands of "Hoff Crabs" were found clustered around the volcanic vents that populate the East Scotia Ridge. They're apparently a type of Yeti Crab; a manly species known for growing hair along their claws and limbs which they use to grow delicious bacteria. These new crabs are different, in that most of their hair is on their underside, giving them a profoundly-masculine chest-rug, much like the one sported by Mr. Hasselhoff.

Scientists have yet to give the crabs an official name, but the nickname given to them aboard the scientific cruise ship that discovered the species seems to have stuck. Personally, I would have went with "The Zangief Crab" instead.

The species was discovered by an unmanned, deep-diving, robotic submersible called Isis, during a fact-finding cruise.

While scientists found thousands of the crabs - up to 600 per square meter - as well as several other new species, including a currently unidentified pale octopus, they didn't find what they were actually looking for. The cruise was originally charted to investigate the hypothesis that the Southern Ocean allows vent-dwelling organisms from other major oceans to disperse via its strong currents. However, few of the animals scientists expected to find actually turned up, instead they found a motley collection of hairy crabs.

"We think the very harsh conditions of Antarctic waters, particularly in terms of their extreme seasonality, probably act as a barrier to some of the vent fauna," explained Professor Rogers from Oxford University's Department of Zoology.

"What we've found is a much more complex situation than we were anticipating, and this has pretty much changed our ideas about how vent organisms are distributed at a global scale."

And now that the obligatory science bit is over, you may proceed with the obvious "Hasselhoff has crabs" jokes. Go nuts.