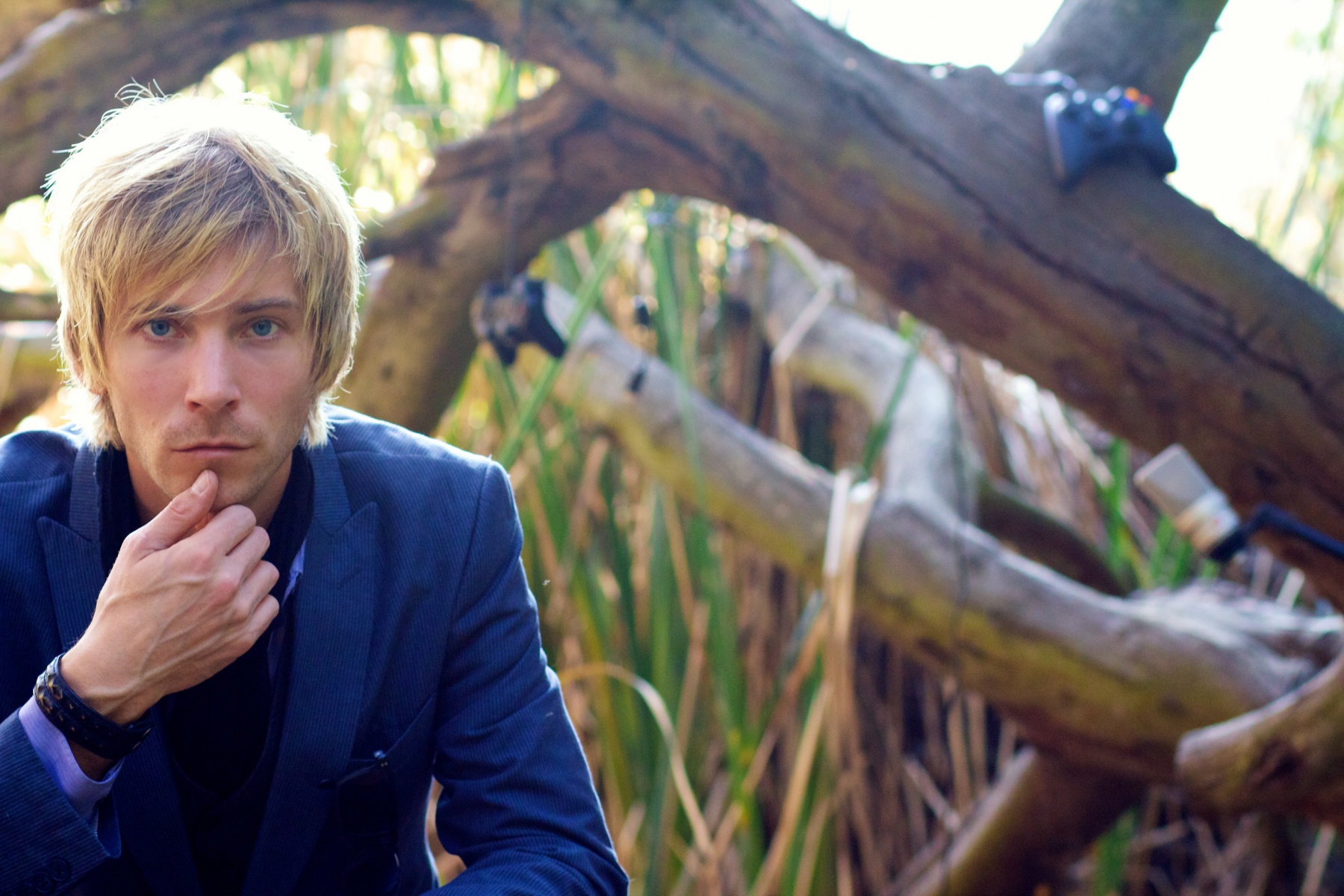 BioShock Infinite's Troy Baker tells us what it's like to provide the voice for the series' first speaking protagonist.

Chances are that if you've never heard of Troy Baker, you've certainly heard his voice. The 35-year-old Dallas native has loaned his vocal talents to villains and heroes of many different animated shows and video games, from Matt Baker in Gearbox Software's Brothers in Arms series, to Vincent, the relationship-confused protagonist of Atlus' Catherine and notorious gangster Two-Face in Batman Arkham City. Players will next hear him as Booker DeWitt, the protagonist of Irrational Games' BioShock Infinite, the next entry in the series due out later this year.

While not a direct sequel to any of the previous games in the franchise, Infinite retains the steampunk themes of the previous titles with massive airships and clockwork gizmos. Set in 1912 atop Columbia, a floating air-city, the player, as an agent the Pinkerton National Detective Agency, is tasked with finding and rescuing a woman by the name of Elizabeth. With a civil war raging across Columbia's streets and airspace, her unique powers may hold the key to ending the conflict.

The character of Booker DeWitt marks both a milestone and a departure for the series as the two previous BioShock games put players into the heavy boots and bee-launching hands of a mostly silent protagonist. In providing Booker's voice, Baker was challenged with bringing the character to life without sounding too 'heroic' or 'gamey', and creating a persona gamers could relate to.

"I suppose my first step was to freak out and ask Ken [Levine] what the hell he was thinking!" Baker said in preparing for the role, and deciding how best to give Booker his personality with the help of Irrational Games' creative director and co-founder Ken Levine. "I'm a huge fan of Bioshock and the thought of shaking things up on such a fundamental level was...horrifically disconcerting. Coupled with that the 'golden rule' of FPS that you don't voice the player, I was justifiably nervous.

"Ken has drilled a phrase in my head: 'Drain the swamp.' Something about that phrase really resonated with me. Basically, it means to strip myself of all the ideas I have and normal choices I would make to try to make something better and just trust the writing and more aptly, trust the character."

Along with Booker, another notable role Baker tackled this past year was filling out the black-and-white suit of Harvey Dent, also known as Two-Face, Batman's long-time villain in Rocksteady's Batman: Arkham City. In taking on reins of an well-known character with multiple interpretations both on and off-screen, Baker drew inspiration from fellow voice actor Richard Moll's portrayal of Two Face from the animated series Batman,. Airing from 1992 to 1994, the animated series also started Kevin Conroy and Mark Hamill.

"Kevin Conroy is my Batman and Mark Hamill is my Joker. " Baker explained. Having grown up watching the series on TV, Baker felt that Moll had best represented the character, and attempted to emulate the way he played the district attorney turned crime lord. "What Richard Moll did as Two Face in the animated series was pretty much my template, because I feel what he did as both Harvey Dent and Two Face was spot on."

Baker also recently starred in Atlus' unique horror-adventure puzzler Catherine, released this past summer. Baker played Vincent, a man who begins having strange nightmares after his long-time girlfriend, Katherine starts talking about marriage. Catherine has received high marks for its story and well-detailed cutscenes along with its challenging gameplay, and was one of Baker's favorite projects.

"Being Vincent in Catherine was total 100% pure unadulterated fun. Atlus is amazing and I love to work with them." Baker said of the Tokyo, Japan-based developer and giving personality to the office-love-torn worker. "They're patient, give tons of latitude and really trust the cast to bring their characters to life. The result is that we not only get to share in the process, but in the case of Catherine, we really feel a sense of pride and ownership in the success of their highest selling game. You can't beat that."

Baker originally started providing voices for anime at first, with several of the Dragonball Z films in the early 90s, and then moving on to series such as Detective Conan and Bleach before getting into the game industry with his first lead role in Gearbox Software's Brothers in Arms series. Since then Baker has given life to a variety of videogame characters, including Martian rebel Alec Mason in Volition's Red Faction: Guerilla and the Autobot Jetfire from Transformers: War for Cybertron.

Baker describes the process providing voice work on a game or an animated project as a great exercise for an actor, as the most prominent tool they have at their disposal is their voice. The amount of time and effort required for each project can vary; Baker recalls that some projects only required a four hour session or two, while others spanned several years and gave much more of an opportunity to explore the story and characters.

"[In animation projects] you have to hand [your voice work] off to the animators and hope that you've given them the right material to sell the scene." Baker said of the differences between game projects and voicing animated series. "I'm always amazed at the interpretations animators come up with."

While in an animated series there's usually less than half an hour to tell a story, voice actors have a lot more ground to cover while working on a game project. In-game cinematics and dialogue are just a few of the aspects required to help a project's story and gameplay move forward and engage the player. For one project, Baker even shot motion capture a few times, likening the process to working on an actual film.

"You eat, live and sleep the game. My thoughts are, you're not making a game until you're sweating. It has to cost you something. That's when you get the real reward. "
Baker also looks forward to any opportunity to play the games he's acted in, enjoying the chance to see how a project turned out. Baker considers himself is a fairly big gamer, enjoying third person shooters and adventure games like Assassin's Creed and Uncharted, and is interested in any game with in-depth cinematics and a great story.

"Most games have an 18-24 month dev cycle, so it's always such a reward to see the finished product. It's a pretty rare opportunity to be a part of making something that you're going to geek out over later, and doing games affords that chance."

After BioShock Infinite, Baker will be voicing Joel, one of the protagonists in Naughty Dog's upcoming survival-horror game The Last Of Us, announced at the Spike TV VGAs this past December.