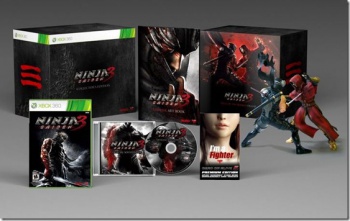 Have you been wondering what the Collector's Edition of Ninja Gaiden 3 looks like? Well, wonder no more.

Last month, Tecmo surprised absolutely no one when it announced it was going to sell a Collector's Edition of Ninja Gaiden 3. While plans for the edition were revealed, no promotional art was actually released. Now, Tecmo's finally willing to show off the Collector's Edition, and it looks somewhat tempting.

In case you haven't heard about the Collector's Edition before now, the bundle is set to include the game, a copy of the soundtrack, an "Unmask" art book, the figurine pictured here, and a demo code for Dead or Alive 5 with all four fighters unlocked (this is pretty notable, as the regular demo will only contain two playable characters who are unique to the console being played).

Ninja Gaiden 3 is due out on March 20th. Early reports claimed that this version of the game would sell for $99.99, but that has yet to be confirmed. At the moment, the Collector's Edition isn't listed on Amazon yet, though that will probably change within the next few days.