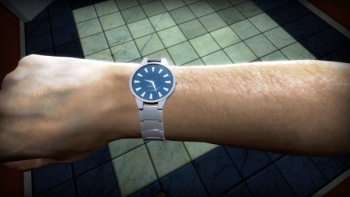 When a modder sets out to alter a game, his or her goals are usually grand, intricate things. "We'll create a layered storytelling experience!" they shout, eyes wide with glee. "We'll have six bosses that each split apart into twelve smaller bosses! And then those bosses will split into 24 even smaller bosses!"

"Yeah," their supporters shout. "If there was anything missing from the original game it was boss fights that devolved into battles against microbial fractal creatures!"

Invariably these plans prove too complicated, the mod lingers in limbo for months and is eventually, mercifully killed, to the dismay or three, maybe four eager fans.

The moral here is that sometimes simple concepts prove far more viable. Like, say, a modification that takes place entirely inside a cramped elevator. Thus, the newly released Elevator: Source.

"Why would I want to ride an elevator in a videogame?" you're wondering. "Most games already force me to do that anyway, and that's the worst part of the game."

Ah, but I haven't explained what's so special about this particular virtual human conveyance, dear reader. You see, this is the world's most intricately detailed, meticulously planned digital elevator ride. You can even bring friends!

From the mod's official site:

Elevator: Source is a single or co-op elevator experience that is different each time you play. What floor will you stop on next? What will happen? Who knows! We don't even know! And we made the game. It's THAT EXCITING.

Elevator: Source brings you:
Up to 28 randomized floors to stop on (with DLC packs possible in the future!)
A thrilling co-op experience
Realistic elevator physics
Cunning, state of the art AI that REALLY GOES INTO THE ELEVATOR AND WAITS!
Real moral choices! What floor do you get off at? Do you ever get off? Only you are able to craft your elevator story.

No video game to date can bring you the quality of elevators or as realistic a simulation as Elevator: Source can!

Oh, but that's just the tip of the iceberg. You don't get the full Elevator: Source experience until you've seen it in action. And by "action" I mean "45 minutes of watching other people play the mod via YouTube." Behold:

Right? RIGHT?! How awesome was that? I mean, there was a guy and there was an elevator, and then there was all that interminable waiting ... that's solid gold!

If you're as psyched as I am for this gripping portrayal of man-on-lift action, rush over to the modification's official site and download the thing. You'll need Half-Life 2: Episode 2 to experience Elevator: Source in full, but trust me, it is SO worth it. You haven't had this much fun on an endlessly long elevator ride since that time you fell asleep while playing Mass Effect.

(Note: This modification and the above descriptive text may or may yes be satirizing the gaming industry's overreliance on the elevator set piece. I was pretty sure that was the direction we were going at first, but at this point I can't even tell anymore.)